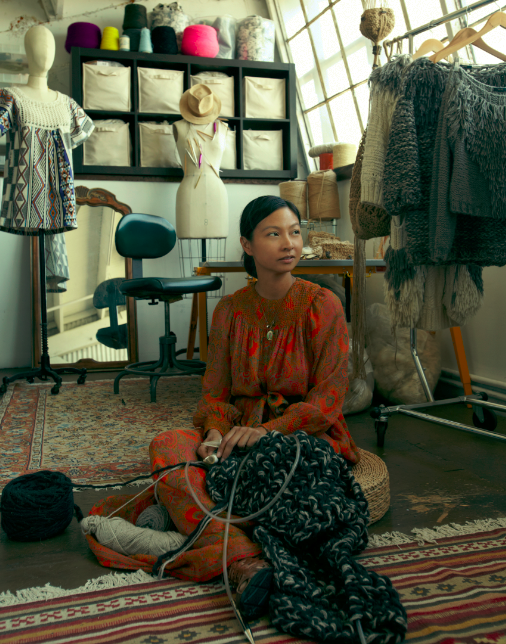 Working with fiber and textiles in much the same way a sculptor might work clay, designer Jo Abellera approaches KKIBO - her line of handmade knitwear, accessories, and homewares - with an inspired artisan’s eye. Natural fibers (cotton, wool, alpaca, jute and hemp) are transformed into work that exudes a deep individuality and an easy, sensual beauty.

Trained at Parsons School of Design, Abellera’s debut line was initially inspired by the writings of scholar Joseph Campbell and the birth of her first child. “I came across a book by Joseph Campbell,” Abellera remembers, “filled with these incredible images of young women in ceremonial costumes made of bark. I started making clothing inspired by these images."

Naming both her child and her new company after the Japanese word for ‘hope’, Abellera’s line is now known for its thrilling mix of primitive, organic forms and a thoroughly modern approach to sustainable, ethical design. Made largely in Los Angeles and her studio in the San Bernardino Mountains, from time to time Abellera also works on special projects with artisans in other parts of the world, including Bolivia and the Philippines. “I think the core mission of KKIBO is to make thoughtful, unique and beautiful things that reflect the natural world,” the designer explains, “using traditional techniques - knitting, crochet, weaving, and macramé - in a new way.”